As I stated when joining Ventana Research, the socioeconomic impacts of the pandemic and its aftereffects have highlighted more than ever the differences between organizations that can turn data into insights and are agile enough to act upon it and those that are incapable of seeing or responding to the need for change. Data-driven organizations stand to gain competitive advantage, responding faster to worker and customer demands for more innovative, data-rich applications and personalized experiences. One of the key methods that accelerates business decision-making is reducing the lag between data collection and data analysis. 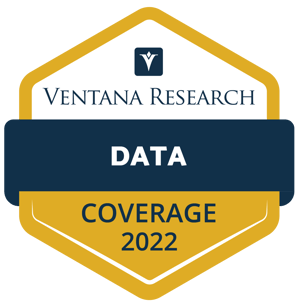 There are multiple approaches to achieving this goal, one of which is decreasing the number of products and services that are used to ingest, store, prepare, process, analyze and share data. Whereas most organizations have historically used separate suppliers and products for the key stages of data integration, data warehousing and business intelligence (BI), the lines between these product categories have been blurring. Business intelligence providers have added data integration and preparation functionality, for example, while data warehousing providers have added data integration and preparation functionality, as well as BI and visualization capabilities. We anticipate the continuation of this trend. We assert that through 2024, analytic data platform vendors will continue to accelerate the delivery of actionable insight by integrating native data integration, data management, analytics and machine learning (ML) with their core data persistence and processing functionality. One of the vendors that most epitomizes this trend is Incorta. 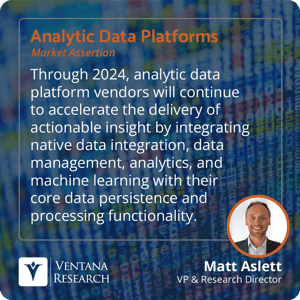 The company was founded in 2013 to simplify and accelerate the data analytics process with its Direct Data Platform. It does this by consolidating functionality for data acquisition, data management and data analysis into a single analytic data platform. Moreover, the Direct Data Platform is built on Incorta’s underlying Direct Data Mapping engine, which enables customers to enrich and analyze data, using either Incorta’s own Data Analyzer tool or data science and BI tools from other providers, without the need for upfront data modelling, transformation and optimization. This has the potential to significantly reduce the time it takes organizations to generate value from their data. More than two-thirds (69%) of participants in Ventana Research’s Analytics and Data Benchmark Research say that preparing data accounts for the majority of time spent analyzing data. For data acquisition, Incorta provides more than 200 data connectors, as well as parallel data loading, schema loading and schema inspection capabilities, as part of its Direct Data Mapping approach, which pre-processes the data as it is loaded to determine potential query paths and accelerate query performance without data modelling and transformation. In addition to the in-memory, columnar analytics engine, Incorta also provides support for accessing data stored as Parquet files in a cloud data lake. Incorta also enables the creation of materialized views of data via Apache Spark, with data enrichment and preparation for data science and ML supported via SQL, Python, Scala or R, using a notebook interface based on Apache Zeppelin. Additionally, Incorta’s Data Analyzer data exploration and visualization interface can be used to create charts and dashboards, while Incorta also supports the use of BI tools provided by alternative vendors, as well as the Incorta Mobile interface for mobile devices.

Having established itself with its on-premises software package, used by customers including the likes of Broadcom, Shutterfly and Redstone Credit Union, Incorta is now focused on expanding adoption via Incorta Cloud, a fully-managed service designed to make it easier for prospective customers to adopt the Direct Data Platform to accelerate business agility. This expansion phase of the company’s go-to-market operations is being funded in part by the $120 million series-D funding round announced in June 2021, which took total funding raised to $195 million. The increased focus on cloud delivery is motivated by customer preference, as well as the desire to accelerate customer onboarding and more rapid delivery of new features and functionality. Incorta has adopted a monthly release cycle for Incorta Cloud with new capabilities delivered via the cloud-managed service prior to being included in the on-premises version. The increased focus on the cloud-delivery model is also designed to drive more self-service, trial-driven adoption with greater emphasis on business users, expanding on Incorta’s existing traction with IT. This is also enabled through Incorta Blueprints, which deliver pre-packaged content, including sample dashboards, for accessing and presenting data from enterprise applications from the likes of Oracle, Salesforce and SAP.

There are multiple approaches available on the market for accelerating analysis of data, especially in cloud-based data lakes, but Incorta’s focus on retaining and exploiting the normalized application data model via its Direct Data Mapping engine is a differentiator. Thanks to Incorta Cloud, it is now considerably easier for prospective customers to try this approach and explore the potential advantages compared to more traditional data warehousing architecture. I recommend that organizations focused on accelerating the time from data generation to insights should consider Incorta when evaluating vendors.