The various NoSQL databases have become a staple of the data platforms landscape since the term entered the IT industry lexicon in 2009 to describe a new generation of non-relational databases. While NoSQL began as a ragtag collection of loosely affiliated, open-source database projects, several commercial NoSQL database providers are now established as credible alternatives to the various relational database providers, while all the major cloud providers and relational database giants now also have NoSQL database offerings. Almost one-quarter (22%) of respondents to Ventana Research’s Analytics and Data Benchmark Research are using NoSQL databases in production today, and adoption is likely to continue to grow. More than one-third (34%) of respondents are planning to adopt NoSQL databases within two years (21%) or are evaluating (14%) their potential use. Adoption has been accelerated by the evolving functionality offered by NoSQL products and services, the growing maturity of specialist NoSQL vendors, and new commercial offerings from cloud providers and established database providers alike. This evolution is exemplified by the changing meaning of the term NoSQL itself. While it was initially associated with a rejection of the relational database hegemony, it has retroactively been reinterpreted to mean “Not Only SQL,” reflecting the potential for these new databases to coexist with and complement established approaches. 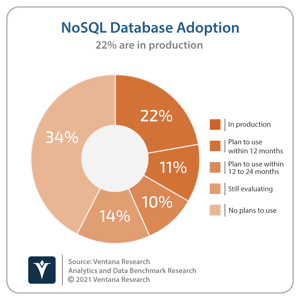 The origins of NoSQL can be traced back to internal research projects created by Google and Amazon, which resulted in research papers published in 2006 and 2007 describing Bigtable and Dynamo databases respectively. 2007 also saw the formation of early NoSQL database startups MongoDB and Neo4j. Other research papers followed, notably from companies such as LinkedIn and Facebook, along with the formation of other prominent NoSQL specialists such as Couchbase, DataStax and Redis. As the NoSQL database market has evolved, numerous other vendors have entered the fray, including the launch of cloud services from Amazon Web Services, Google Cloud and Microsoft Azure as well as IBM and Oracle and a host of other NoSQL startups.

The initial development and subsequent widespread adoption of NoSQL has been driven by multiple requirements: As well as extreme scalability, responsiveness, flexibility and agility, it is worth noting that amongst the most important was necessity. The likes of Amazon, Google, LinkedIn and Facebook did not invest time and money in developing new databases for amusement. These organizations did so because requirements for scalability, responsiveness, flexibility and agility made existing relational database products unsuitable. As such, the early NoSQL database offerings were designed to solve very specific requirements. They had narrow functional capabilities and addressable markets. Early NoSQL databases could be bucketed into four primary categories: key-value stores — in which data is stored as a simple list of keys and values; wide column stores — in which there can be multiple sets of values associated with each individual key; document-oriented databases — in which data is stored in a semi-structured file format, such as JSON, with no fixed schema; and graph databases —in which the relationships between keys and values are also primary attributes. As this list indicates, NoSQL data models range from highly simplistic (key-value stores) to relatively complex (graph databases). The use cases to which they are suited also range accordingly and will be discussed in a future Analyst Perspective.

The various data models are important considerations for NoSQL database use cases. However, while a few specialist databases remain, the period of evolution and functional maturity of NoSQL databases has seen the development of multi-model capabilities. Many NoSQL databases are now able to support a combination of key-value, wide column, document and graph capabilities, blurring the lines between the appropriate use cases. As we previously described, NoSQL vendors have also added capabilities and features that have previously been the preserve of the incumbent relational vendors, including relational database concepts and even the SQL query language. Additionally, we have seen adoption driven by requirements that transcend the data model. Developer agility is one such driver, as is horizonal scalability, which is increasingly important given the growing requirement for cloud-agnostic data platforms that support availability and scalability across multiple regions and data centers/cloud providers. 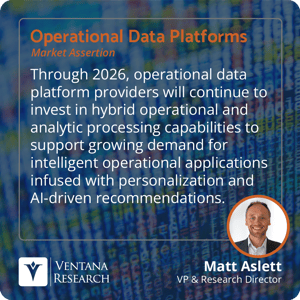 While we consider NoSQL databases to be part of the operational data platform category, NoSQL vendors have also invested in functionality to support real-time query or analytics, particularly hybrid data processing to support the growing demand for intelligent operational applications infused with the results of analytic processes, such as personalization and artificial intelligence-driven recommendations. We assert that through 2026, operational data platform providers will continue to invest in hybrid operational and analytic processing capabilities to support growing demand for intelligent operational applications infused with personalization and AI-driven recommendations.

The NoSQL database landscape has evolved rapidly and significantly in the past 15 years as specialist vendors have matured and established providers have entered the market. I will examine the potential use cases that are well-suited to NoSQL databases in a forthcoming Analyst Perspective, but in advance of that, I recommend that organizations that have not investigated the use of NoSQL databases or have not evaluated the available products and services for some time, should do so when assessing options for data transformation and modernization efforts, ensuring that all potential opportunities are considered.

MariaDB Offers One Database for All Workloads